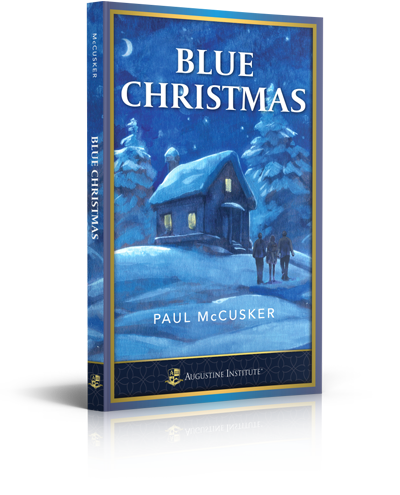 Richard Lee couldn’t have been more surprised when he died right before Christmas. Yet it was an even bigger surprise to watch his three grown-up children return home to deal with his funeral arrangements—and their personal grief and conflicts.

There’s David, the successful businessman. There’s Jonathan, the failed artist. There’s Ruth, the wayward daughter. Each one has a reckoning with the father they didn’t understand. And Richard Lee learns more about them than he ever knew in life.

At turns poignant and funny, Blue Christmas is one family’s discovery that Christmas is still a time of miracles.

Hope Springs is a fictional town in the mountains of Colorado, the setting of the Hope Springs series. Hope Springs is a multi-faceted series of stories that explores living the Catholic faith in the modern world. This series presents Catholic culture easily and normally, and provides opportunities for readers to think about the consequences of words and actions. Centered around the Perry family, Hope Springs was introduced as short stories in the Signs Of Grace catechetical workbooks and now includes novels for First Readers (ages 5-8) under the banner The Adventures Of Nick & Sam. The likeable and engaging characters reflect the sensibilities and struggles of being Catholic in the quirky small town of Hope Springs, playing out their faith at the St. Clare of Assisi Catholic Church and School, with their neighborhood friends and adversaries, and in the many adventures that makes the teachings of the Church come alive. This series is written similarly to the Adventures in Odyssey series and the Magic Tree House Series, and is recommended for readers ages seven and up, but can also be read by parents to younger children.

Paul McCusker is an American writer most widely known for Adventures in Odyssey, but he has worked on many other types of writing projects: novels, plays, musicals, radio dramas, and movie scripts. Paul now writes for the Augustine Institute Radio Theatre productions and the Publishing Department. He is a convert to Catholicism, and lives in Colorado Springs, Colorado with his wife and children.