The Fragility of Order: Catholic Reflections on Turbulent Times 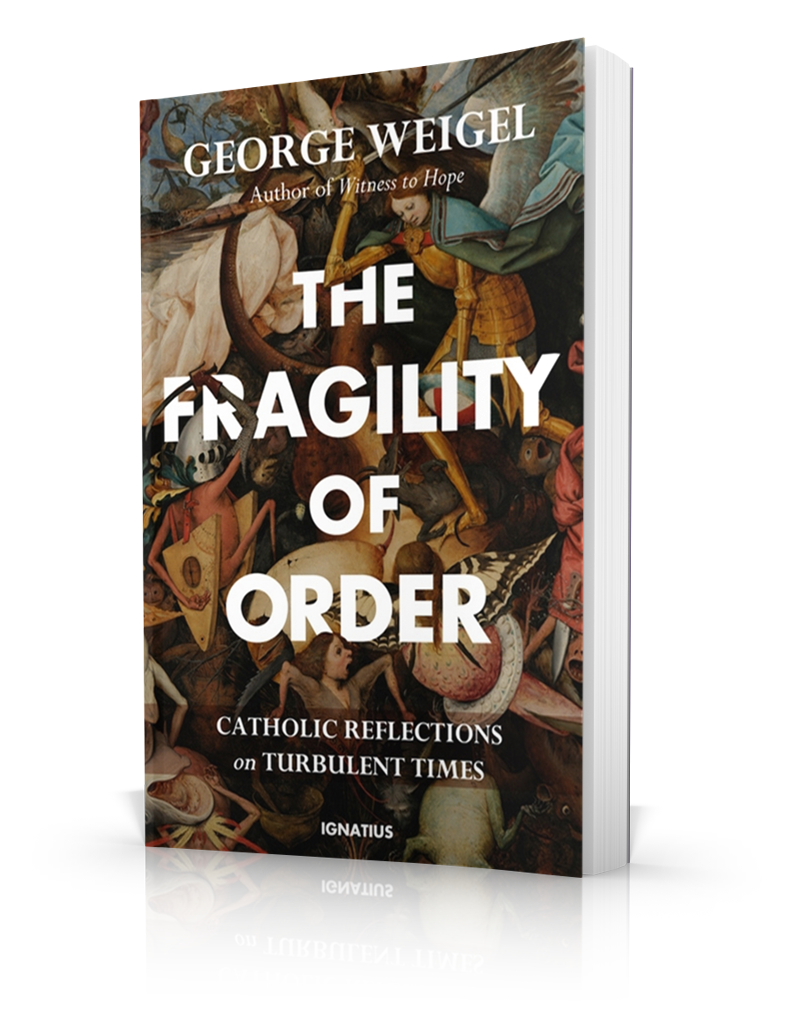 One of America's most prominent public intellectuals brings thirty-five years of experience in Washington and Rome to bear in analyzing the turbulence that characterizes world politics, American public life, and the Catholic Church in the early twenty-first century.

In these bracing essays, George Weigel reads such events as the First World War, the collapse of Communism, and the Obama and Trump presidencies through a distinctive cultural and moral lens, even as he offers new insights into Pope Francis and his challenging pontificate.

Throughout, two of Weigel's key convictions—that ideas have consequences for good and ill, and that the deepest currents of history flow through culture—illuminate political and economic life, and the life of the Church, in ways not often appreciated or understood.

Many of the chapters in this book originated in George Weigel's annual William E. Simon Lecture, which since 2001 has become a major event in Washington, D.C. They are unique in their application of philosophical and theological perspectives to the issues of history and politics, enabling the reader to see current events in a deeper way.

Praise for The Fragility of Order

"Every page in this book shines with moral clarity, literary pyrotechnics, and the illumination of history. The Fragility of Order proves once more that George Weigel is our Virgil through the dark woods of modernity."
— Mary Eberstadt, Senior Research Fellow, Faith and Reason Institute; Author, Adam and Eve after the Pill

"The essays in this volume, written independently over two decades, have a wonderful unity rooted in Weigel's penetrating intellect and global vision. His thoughts on Benedict XVI's 2006 Regensburg lecture – a lecture savagely misrepresented by critics at the time, but brilliant in retrospect – are worth the price of the entire book; but they're just one part of a lucid, compelling, and highly recommended read."
— Most Rev. Charles Chaput, O.F.M. Cap., Archbishop of Philadelphia

"For over thirty turbulent years, George Weigel has been a steady voice of reason, providing his readers with theologically informed perspectives on politics and events. The Fragility of Order is a sober yet cautiously hopeful collection of essays on international relations, the travails of the Republic, and the state of the Church in a world where freedom, reason, and truth are under assault."
— Mary Ann Glendon, Learned Hand Professor of Law, Harvard University

"George Weigel, one of the world's foremost authorities on the Catholic Church, possesses a unique combination of deep theological understanding, political sophistication, and perceptive historical analysis that makes his insights about our turbulent times so illuminating. This book ultimately reminds us that good ideas, rooted in tradition, lead to good ends--and bad ones to ruinous outcomes."
— Raymond Arroyo, EWTN Lead Anchor; New York Times Best-Selling Author, the Will Wilder series


"The Fragility of Order can be read as a kind of history, moving on two levels. Weigel begins with the First World War and then brings us through the false dawn of the "end of history" on up to our perilous present day. At the same time, we watch the unfolding of Weigel himself – not just as a historian but also as a social critic and, most importantly, a theologian. Only a writer and thinker as gifted as Weigel could pull this off. He is the great clarifier for our muddled times."
— Andrew Ferguson, National Correspondent, Weekly Standard; Author, Crazy U and Land of Lincoln

"Weigel's superb essays on the difficulty of keeping order are a very welcome occasion for us to review where we have been, where we are now, and where we are likely to be if the order is not corrected."
— James V. Schall, S.J., Emeritus Professor of Political Philosophy, Georgetown University; Author, The Order of Things

"George Weigel is a leading American Catholic intellectual, and his thoughtfulness and erudition are on colorful display in The Fragility of Order. This insightful collection of essays touches on key issues related to culture, history, foreign policy and religion. Anyone interested in history, current events, and the role of the Church in the modern world will be enriched by reading this book."
— Timothy Michael Cardinal Dolan, Archbishop of New York